A lot of people, myself included, have become convinced that the financial sector has grown way too big. A popular theory that is making the rounds on the internet and in ‘alternative’ literature is that there is a fundamental mathematical problem involving debt and interest. Two proponents of this theory are the animator Paul Grignon and freelance economist Bernard Lietaer. According to these theories, new money is mostly created as debt when private banks issue new loans. So far, the theory is compatible with mainstream economics. However, the theorists claim that there is a fundamental mathematical problem that makes sure banks will always continue to grow. The basic theory is that since the banks do not create new money for interest, a shortage of money will occur and it will be impossible to pay back both the debt and the interest. Thus, bankruptcies will be unavoidable and banks must always grow.

Facing criticism that this does not take into account the fact that bankers spend some or all of the money they earn on consumption, Grignon updated his theory. He now claims that debts can indeed be repaid, but not if any borrowed money is re-lent, at least not unless the economy as a whole keeps growing exponentially. In this post, I attempt to show that this is simply untrue. Grignon’s updated theory only makes things needlessly complicated, and there is no fundamental mathematical problem.

Consider the following sketch. This is a static system: there is no growth, no inflation, no new loans are taken, and no loans are ever paid back. It stays the same year after year. The green arrows represent loans, and they do not change. The red arrows represent payments. We can sum up the flows and see that everyone will end up with the same amount of money every year. 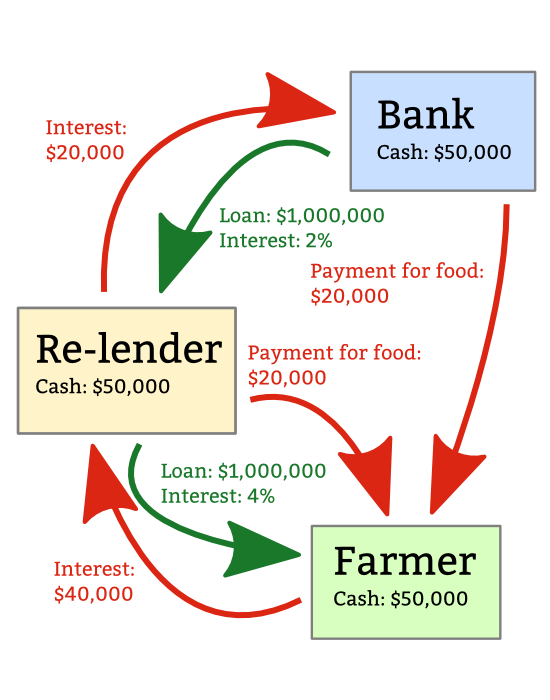 Of course, we can see that this example seems unfair: the farmer produces food for everyone, while the others simply live off interest. But the example is not intended to be realistic; it is only to show that there is no mathematical problem with issuing loans for interest. The reasons for the growth in the financial sector are different and more complicated.